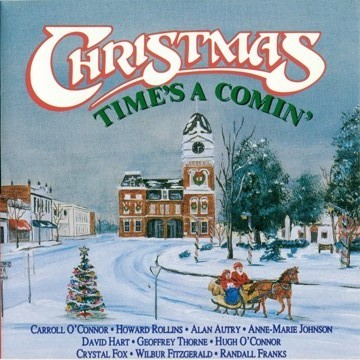 Autry-Franks Productions in association with Crimson Records, Sonlite Records and MGM/UA Son-140, CR-2761 (1991) "In the Heat of the Night" stars Alan Autry, “Bubba Skinner,” and Randall Franks, “Officer Randy Goode,” organized the effort under Autry-Franks Productions bringing together the "In the Heat of the Night" cast and numerous stars of country, bluegrass and gospel music to assist. The Christmas CD is available for a $20 Donation within the U.S. to the Share America Foundation, Inc.

"In the Heat of the Night" stars Alan Autry, “Bubba Skinner,” and Randall Franks, “Officer Randy Goode,” organized the effort under Autry-Franks Productions bringing together the cast and numerous stars of country, bluegrass and gospel music to assist.

Autry and Franks released “Christmas Time’s A Comin’” CD on Itunes and Amazon.com still focusing on its original purpose.

“Last year we heard from many Heat fans who were really pleased that we once again made the actual CD available,” Franks said. “Folks can still hold a piece of the show’s history in their hands by getting the CD including photos of the cast and of the historic recording sessions. But now, in addition if they just want to download the music or simply hear a sample they can. Their download and CD purchases help us help others.”

Franks was the studio producer on the eight-month long production that included over 60 performers, visited seven studios in four states, included 12 recording engineers and took over 175 studio hours to complete.

“Whether its Carroll O’Connor’s ‘Bring a Torch, Jeanette Isabella,’ Crystal Fox and her version of ‘The Christmas Song’ or Alan Autry’s ‘Rudolph, the Red-Nosed Reindeer’, there are some musical tastes that fit almost every palate,” Franks said.

The CD was originally released in association with Sonlite Records, Crimson Records and MGM Worldwide Television Group and debuted officially from the stage of the Grand Ole Opry with a special appearance by Franks, Autry and show co-star David Hart. It is available again in association with original partner Sonlite Records, but this time exclusively through the non-profit Share America Foundation, Inc. continuing the original purpose denoted by the cast and music stars.

Autry and Franks ("Let’s Live Everyday Like It Was Christmas") joined other cast members including the late Carroll O'Connor, the late Howard Rollins ("The Night Before Christmas"), Anne-Marie Johnson ("Little Drummer Boy"), Hart (""Let It Snow), Geoffrey Thorne ("I Heard the Bells on Christmas Day"), and Fox to perform a favorite Christmas song. Other cast members including Wilbur Fitzgerald, Bob Penny and Sharon Pratt joined in on group performances of "Jingle Bells" and "Christmas Time's A Comin'.''