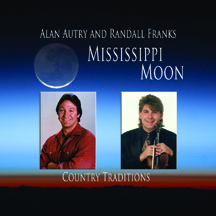 Alan Autry and Randall Franks, best known as “Bubba Skinner” and “Officer Randy Goode” from the Mississippi set NBC and CBS series “In the Heat of the Night” (1988-1994), join voices for the Americana CD “Mississippi Moon - Country Traditions.”

Two American television stars from the South are back but this time sharing their talents on CD.

“The stories told in traditional country songs are often like those we share while acting on the screen,” Franks said. “This collection combines old-style country, Southern gospel and bluegrass musical sounds on classic country and new songs. Some are upbeat and some are mournful with stories that folks will remember. There are uplifting messages that will hopefully make you want to smile.”

Within the collection, Autry and Franks, each share songs vocally while Franks contributes musically and as producer throughout the project. Autry-Franks Productions created the project released by Crimson Records.

“I’m just an actor who loves the sounds of classic country music and I am honored to share my limited vocal talents,” Autry said. “Singers such as Johnny Cash, Lefty Frizzell, David Houston and George Jones were the backdrops of my experiences.

“With the support of some talented musicians, I included a different musical look at Johnny’s ‘I Walk the Line’ and Lefty’s ‘Long Black Veil’ as well as three new songs.”

One among the three new songs is Autry’s original song “He’s the Only Way,” a gospel song written with Franks which tells the story of a father who is losing himself to alcohol after the death of a child but through an inspiring revelation turns his life around.

“It is hard to say what inspires a person to write a song,” Autry said. “It is like writing a mini-script; you want to tell a story that will hopefully inspire someone through its telling.”

According to Franks, it was a movie script that inspired him to take Autry’s idea and pen the mandolin-infused “Mean Joe Blake” reminiscent of the story songs of the 1960s such as Jimmy Dean’s “Big Bad John” and Walter Brennan’s “Old Rivers.”

“This is probably one of my favorites on the CD because thanks to the wonderful advances in technology, I was able to combine some archival tracks of two of my Grand Ole Opry heroes - Jim and Jesse McReynolds to enhance the performance I share,” Franks said. “I am thankful to Jesse and Jim for all the encouragement they shared with me.”

The first radio single released from the CD is the Southern gospel performance of “You Gotta Know the Lows” by Franks complete with mixed group vocal harmonies electrifying the arrangement.

Franks other contributions are new songs “Georgia Rain,” and “I’m Straightening Up My Life.” On the latter, he combines harmonies with his co-writer - three-time Dove nominee Mark Wheeler of the Marksmen Quartet.

“Both songs bring stories that encourage one to consider where they need to be living life - hopefully with God as a big part of it,” Franks said.

Wheeler actually co-authored two other songs on the CD with Franks – “If I Could Paint a Picture” performed by Autry and “I Almost Had a Hit,” an upbeat novelty duet featuring Franks and Autry singing about some things that “almost” happened.

Franks also reaches back to 1959 to give another spin to Patsy Cline’s “Gotta A Lot of Rhythm in My Soul.”

Alan Autry is currently recurring on the WB series “Hart of Dixie” while working on his latest original Christian movie. His most recent film is "Forgiven."